Finding the best gifts for anime fans can be a difficult thing. If you’re at a loss when choosing a gift for them, you can honestly never go wrong with a Graphic T-shirt. This Killua T-shirt will be a perfect gift for anyone who loves this anime.

Best Sellers in Our Merchandise Hunter x Hunter initial is a Japanese manga then it has grown in popularity as an anime television show. The HxH anime has been a The hoodie has gone from moody-teenager mainstay to haute-couture hero in only a short time. It becomes some kind of favorite item for teens and 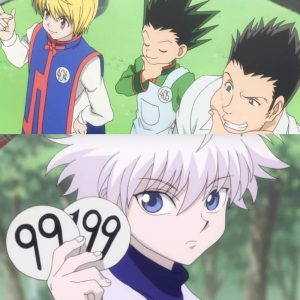 Hunter × Hunter (Hantā Hantā) is a famous teenage manga series by Japanese manga artist Yoshihiro Togashi. It has been serialized by the Shueisha publisher in Weekly Shōnen Jump from March 3, 1998 to present.

So why do you like to be a chaser? Is it all about money, really? No way, not at least for Gon Freecss.

Our otaku made merch is just waiting for you to hunt it down, collect it, and contribute to making it yours. Whether you’re a total lunatic for the original manga or you’re crazy for the semi-recently deployed Hantā Hantā anime (or both, when it comes to loving this anime, there’s really no wrong answer). Our #1 goal is to give our customers the best experience and the same experience that they are watching this animation series. We have a dream that provide our store worldwide with an affordable price.

Why choose HxH Shirts or Hoodie?

With quality like this at prices as low as these, along with coupons, offers, and so much more, this is a steal deal and no matter what happens, you can not miss out though! Browse our merchandise now and add all your favorites to your cart with just a click to position your order. Happiness is only a swipe away and it’s something you know.

No matter how much you want to show off your passion for your beloved manga-turned-anime, we have you covered. So stop hunting on the internet, you have actually trapped the ultimate Hantā Hantā Merch right here!

You’re assured of getting the products in this range, from shirts & apparel you’ll want to fulfill your collection (and your life) with, to must-have accessories for your day-to-day, to the decoration that’s sure to turn your house into a Hantā Hantā-approved home. In order to put your closet to life, check out our T-shirt or our hoodie. Will you need to add a little flavor to your day at school? How about our Backpack for otaku? Accessories, Posters, Figures,… We even have a lot of home decor accessories that you’ll want to add to your room.

At here,  quality is our #1 priority, followed only by customer satisfaction and a seamless ordering and delivery process to make it all happen at the click of a button! If you want all your favorite pieces to get the best deals and prices, check out our merchandise now and pick your favorites before we run out of them. This page has made the process as easy as a piece of cake to ensure a reliable and fun shopping experience and we hope you enjoy it too!

Togashi Yoshihiro’s Hantā Hantā comic has been adapted to two versions, but in this article, I will introduce you to the 2011 version. Compared with the first version released in 1999, this manga series of the MadHouse family is considered to be much more loyal to the original work, and does not hesitate to show off the quintessence of this excellent manga.

Twelve years before the events of the film begin, a mysteriously famous chaser Ging leaves his son Gon to follow the path of a professional chaser. His mother passed away due to an accident. Until one day while wandering in the woods and being attacked by a wild beast, Gon is saved by Kite, one of his father’s students. Thanks to Kite, Gon learns that his father is still alive and has become a true chaser. So the story begins, when Gon is determined to set out to find his father.

In the movie, Hunters here are understood to be chasers who hunt for almost everything from cards in the game to the human body parts, all of which can be targeted, auctioned off and sold. about profit. However, the story of this anime is not just that simple, each character in the movie has a different motive, from goodwill to enmity, harmoniously combined with the element of “hunting something”. has made HxH a special thriller and attraction.

Although HxH’s world is not too large, other famous Shounen works such as One Piece, Naruto, but are built in an extremely flexible, systematic and especially logical way. Each action must be calculated 7749 times to be performed, and what happens must also have a clear reason. If to describe, the world of chaser in HxH is a world that is both charming and deadly.

The film’s storytelling style is also a major highlight. As brought straight from the story pages, HxH has battle scenes that are cleaned up to focus entirely on two fighting subjects, the game progress is always pushed to the extreme because of the screens. Brain tension math, every character is carefully portrayed and almost all are extremely dangerous. The hunting process is also delicately portrayed and especially creative and graceful.

The plot of the film is not simple, as it gets darker and hacked the brain, but the film only stops at the Election arc because the original comic is also unfinished (because the author has “back pain”). Therefore, current HxH is not too long and can be enjoyed in a short time. With such a period of time, HxH still has an excellent story, not only dramatic but also contains a lot of deep metaphors (such as comparing humans and ants in the Chimera arc), even names characters are also discovered by fans of HxH deep inside.

In short, HxH is a work worth watching whether you are a fan of anime or not. And if you can, please read the Manga as well to experience the magic of the world that Togashi Yoshihiro drew.